‘Political leadership is the most important factor in getting Britain cycling’, says Jon Snow – press release

“The politician that takes leadership on cycling and really revolutionises it will leave a legacy for generations,” journalist and broadcaster Jon Show told the final session of the Get Britain Cycling inquiry yesterday. 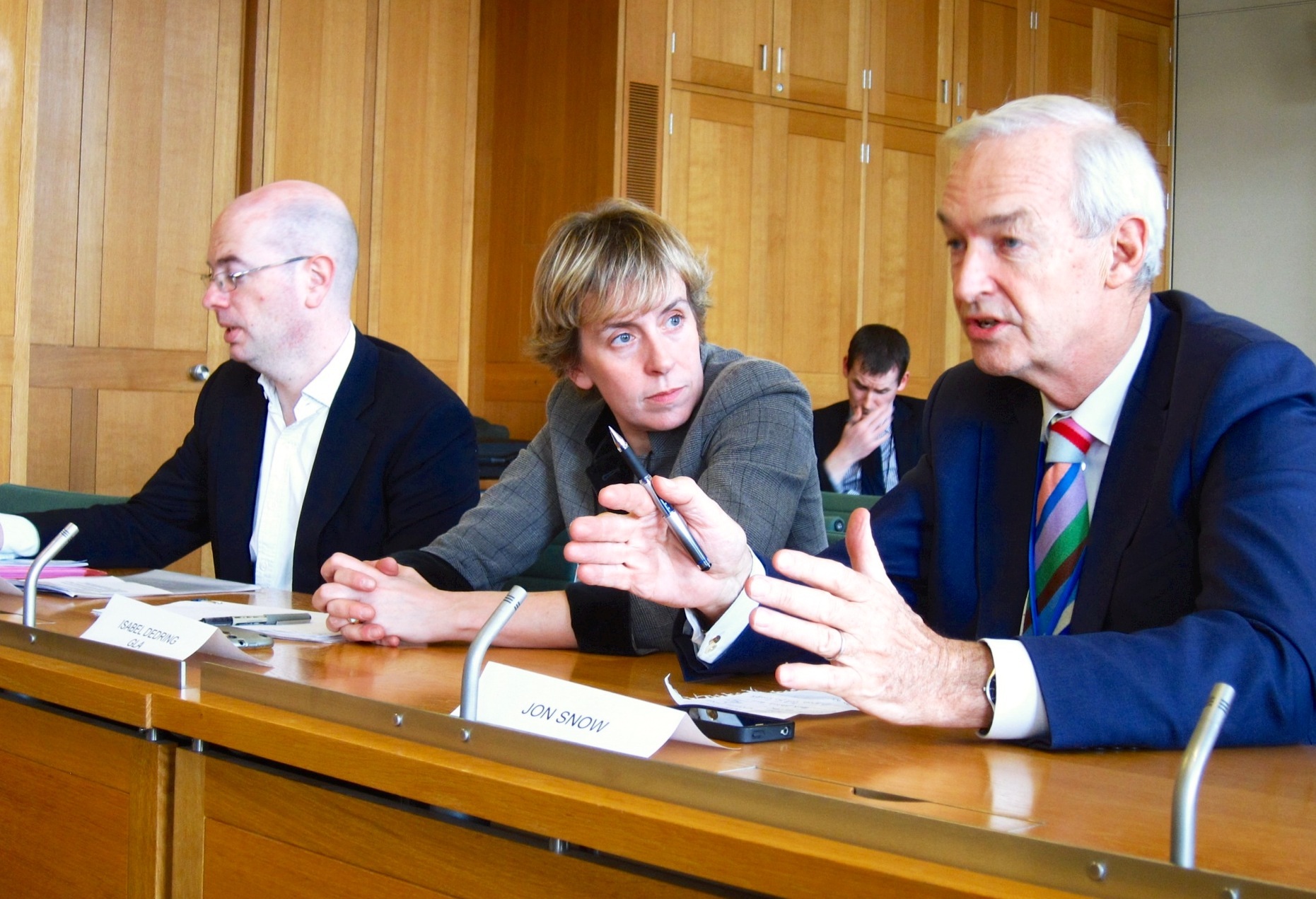 Jon Snow gives evidence to the Get Britain Cycling Inquiry

Snow, who is also President of the CTC, also told the inquiry that one thing the government could do to transform cycling is “make it compulsory for cycling provision to be included in all new road schemes.” Transport Minister Stephen Hammond – who also appeared at the inquiry – was sympathetic to this point.

The sixth and final session of the Get Britain Cycling inquiry covered a range of issues including hearing from the Mayor of London’s new Cycling Commissioner, Andrew Gilligan, an expert from the Dutch Cycling Embassy, the Crown Prosecution Service and two government ministers.

“Yesterday was a fitting end to the inquiry’s evidence sessions. The debates covered political will, sentencing, London’s plan for the next four years, what is happening in Wales and, most importantly – we heard from two government ministers about how seriously they are taking our mission to get Britain cycling. Everyone involved in all areas of local and national government – including transport, health, the environment – has a role to play in stepping up to this challenge. But Jon Snow’s comment about how political leadership from the very top is key is a message that really resonates and brings us full circle from the first session. I’m pleased to hear that the government is going to take our findings seriously, treating them like a Select Committee report, and I look forward to publishing our recommendations next month.”

Two government ministers from the Department for Transport – Stephen Hammond and Norman Baker – agreed with the inquiry that cycling needs to be considered as a “mainstream form of transport.” Baker said that cross government meetings are happening and that this has led to “a greater understanding and commitment on cycling, including significant interest from the Prime Minister and the Deputy Prime Minister.” Stephen Hammond also agreed that it would be “sensible” for cycling to be incorporated into plans for new roads. Both ministers talked about the responsibilities of local authorities to encourage and promote cycling. Baker said that “all too often cycling is dealt with by a cycling officer who is considered junior. This needs to change.” Hammond also spoke about the need for the Highways Agency to include provision for cycling in all transport schemes.

The sixth session of the All Party Cycling Group’s Get Britain Cycling inquiry also focused on London’s plans to revolution cycling in the capital. The Mayor’s new Cycling Commissioner, Andrew Gilligan, was careful not to reveal too much of the Mayor’s plans which will officially be announced on 7 March. However, he did reveal that there are plans to be spending £18 a head or £145 million a year on cycling by 2016. Gilligan also spoke about the need to change the perception of cyclists. He said: “the key thing is to broaden the amount of people cycling. The typical cycling is male, white and employed.”

Isabel Dedring, London’s Deputy Mayor for Transport, admitted that while London “does consider the effects on cycling of new schemes, it isn’t working properly.” Dedring said this policy needs to be embedded at Transport for London, also adding that they are “looking at” putting restricting in place for HGV movements in the capital.

Wales’ “radical approach” to transform cycling was also presented to the inquiry by the Welsh Assembly’s Minister for Transport, Carl Sargeant. The Minister talked about the Assembly’s Active Travel Bill and said that he wants “walking and cycling to become the norm – that means a shift in culture.”

Witnesses from the Crown Prosecution Service (CPS) and the Association of Chief Police Officers (ACPO) talked about sentencing in cases where cyclists and other vulnerable road users are hurt or killed on the road. ACPO’s Mark Milsom said that there is an “issue around sentencing for death by dangerous driving offences” before admitting to the inquiry that ACPO isn’t currently telling the police to enforce 20mph speed limits. The CPS’ Nick Hunt said that sentencing is “a matter for the courts.” When presented with the example of the high profile case of the motorist who killed cyclist Tom Ridgway and was given a £35 fine, Hunt said he wasn’t aware of this case.

The inquiry also heard from experts in Europe about the lessons the UK can learn from countries like Holland and Germany. The European Cyclist’s Federation, Kevin Mayne, told the inquiry that he has visited 12 countries around Europe to observe their attitude to cycling. Buy accutane for acne from https://accisotret.com canadian online pharmacy 24h. He concluded that the Dutch are “uniquely good” while the UK is “uniquely bad.” Roelof Wittink from the Dutch Cycling Embassy said “It’s not about the number of cars, it’s about focusing on the people in a city who are shopping or socialising We need to aim for an optimal share of cycling as a form of transport.”

““We need firm leadership from government and a dedicated funding stream if we are to make significant progress in cycle safety and accessibility, so it was entirely appropriate that today we heard from the ministers that can make that happen. It is only by making significant improvements to our infrastructure, introducing clear and enforceable regulations to protect cyclists, and investing in training programmes that we will really start to make a difference.”

The Get Britain Cycling inquiry’s report, including recommendations for the government, will be published on the 24th of April.